Blog - Latest News
You are here: Home / Divorce / The Grounds/Reasons For Divorce. 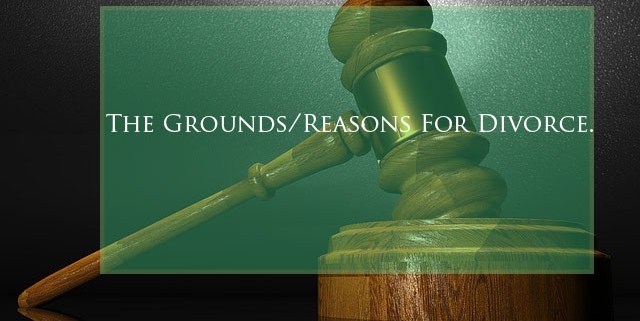 Some states do not recognize the fault grounds for divorce at all. In these states, a complaint should be made by a single spouse that the marriage is beyond repair or that you and your spouse have differences that can’t be resolved. Fortunately, the spouses don’t need to provide a reason for the breakdown of the marriage. The idea behind no-fault divorces is that both spouses of the marriage don’t need to blame each other for the divorce. Here the couple can identify their issues and resolve them in an orderly fashion.

There are some states that don’t need the details of how broken ones’ marriage is. In these states, when spouses are living apart from each other for a certain amount of time, that is enough to show the court that the marriage has ended. However, the separation period should be a minimum of six months and can be as long as five years depending on where the spouses reside. Some states in the US require that the couple live separately to show that their marriage is broken beyond repair.

It is essential to keep in mind that through fault grounds for divorce, there is a chance that your spouse in the divorce may contest to the divorce. This is because the fault can affect the way the courts make the division on the property. If you’re considering filing for divorce on fault basis, this is something to remember. Additionally, it can also affect spousal support and alimony. However, there are some states that the courts consider misconduct in the marriage when deciding certain issues.

The laws that surround the grounds for divorce can be incredibly complicated. That’s why it is essential to acquire the help from a competent divorce attorney Lake Mary FL. The right attorney would be able to guide you through the process with minimal backlashes and as little problems as possible. If that’s what you’re looking for in an attorney, contact The Law Office of Erin Morse. At our firm, we issue only the best lawyers to make sure your case goes in the right direction. We won’t let you down. Contact our firm for a consultation.