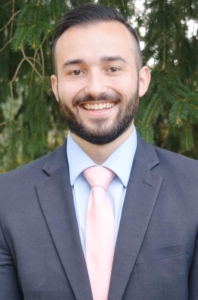 Attorney Joseph Anthony Flores joined the Law Office of Erin Morse in May of 2019. Mr. Flores was born and raised in Miami, FL and is of Cuban descent. Mr. Flores then moved to Orlando in 2013 where he received his B.A. in Legal Studies with a minor in Political Science at the University of Central Florida. Following his graduation from UCF in 2017 Mr. Flores moved to Tennessee and attended law school at the Lincoln Memorial University – Duncan School of Law where he earned his juris doctor degree in May of 2020. Mr. Flores then took the Florida Bar Exam in October of 2020 where he passed and is admitted to practice law in the state of Florida.

Throughout his career in both academia and in the work force Joseph has had many opportunities that have allowed him to develop his skills. Joseph was a member of the Trial Advocacy Team at both UCF and LMU-Duncan School of Law. Mr. Flores has won several awards in different mock trial tournaments in which he has competed in across the country including awards for Best Opening Statement and Best Closing Arguments. Mr. Flores has experience interning under a Judge at the Knox County Juvenile Court and interning at the Catholic Charities of East Tennessee – Immigration Legal Department. Mr. Flores then joined the team at The Law Office of Erin Morse in May of 2019 as a law clerk.

Schedule a Consultation with Attorney Flores